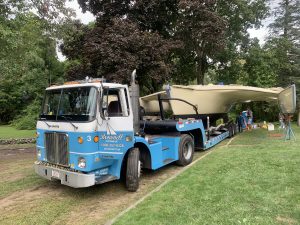 Brownell Boat Transport was honored to be part of bringing boat-builder Wilson J. Lobao Jr.’s dream of his trimaran sailing on open water. Wilson worked on his 43-foot by 31-foot wide mahogany trimaran for 32 years, right up until his unexpected death in August of 2017. His boat was a landmark in the Peabody community, and anyone who passed by Lowell Street could see the boat and Wilson working on its construction.

The boat haul had to be planned very carefully, because not only was the trimaran extremely wide, it also had been built in the backyard of Lobao’s house. A 100-ton crane from Astro Crane Service of Boxborough lifted the vessel over the trees, and then lowered it onto work stands on the 9th. The trailer came to pick up the vessel on the 10th and it was moved at 2am on the 11th..

Our boat transport company then made the 2.8 mile trip north to Pope’s Landing in Danvers in the middle of the night, with a police escort on the night of Sept. 9th. The street signs were lowered, and our crew carefully navigated to the dock, where we eventually used our specialized, air-ride hydraulic trailer to launch the boat for the very first time.

Not only did we believe we were the best crew for the job, we were especially proud to be part of this community effort to honor Lobao’s dream and continue his legacy. The Wilson’s Legacy Trimaran Facebook page grew and and continues growing as the efforts to find new owners and funding to bring the boat to launch and completion. Even though the boat transport occurred at 2am, videos were taken and posted to Facebook, and observers gathered on the grass and benches at Pope’s Landing to see her off. It was a historic moment for the Wilson family and the Peabody community, and we were proud to have been given the responsibility of transporting the vessel. 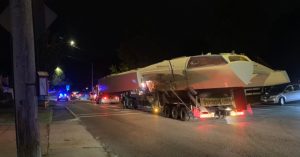 Construction began in 1984 and every single piece was built by hand, including fabricating brackets for the trimaran’s trampolines. A trimaran is boat with three hauls — a main haul, and an outrigger on either side. Most trimarans are used for racing, but they are also an excellent choice for long-distance travel.

The project was truly a labor of love, and when Lobao died, the exterior was almost finished, except for the nets, mast, cleats, and other rigging. The interior, on the other hand, was very much unfinished. The family knew that whoever the next owners were, they would need to be able and willing to put in the work to finish the vessel.

After Lobao’s death, the house and property the boat was resting on were sold, and as part of the agreement the boat had to be removed. The options were for a boat transport company like Brownell to take the boat to the water or for the boat to be cut into pieces and taken to a landfill.

People close to boating culture knew that chainsawing such a beautiful, handcrafted boat into pieces just couldn’t happen. The boating community rallied around the project and Lobao’s family worked tirelessly to find funding through a GoFundMe Campaign in order to help offset the price of moving the boat transport as well as the future construction — and we are still accepting donations. The family decided to give the boat to the new captain in order to bring the dream of Wilson’s Legacy to life. 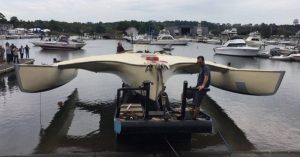 Ads were posted on Craigslist and boating forums, and after an extensive search the couple David Stennett and Court Taus of Marathon, Florida became the new owners of the boat. They both have their captain’s license. Taus is experienced in woodworking and Stennett works in fiberglass repair.

David and Court couldn’t be a better fit for the project. They both have considerable experience working on boats and have spent much of their lives on the water. In fact, Stennett said he has only spent 13 years out of his 55 living on land. The couple plans to spend the rest of their life on Wilson’s Legacy — after spending the roughly two years it will take to finish the project.

Because the boat still does not have rigging, it will be motored down to Floria, where the couple plans to give it all the love it needs to set sail.

Brownell Boat Transport Company is a family company, and we are a company of boaters. We love when we have the opportunity to take part in projects like transporting Wilson’s Legacy, but we put the same care into every project we take on — large or small.

Our company began in 1954 when David (Fred) Brownell invented the Hydraulic Trailer and Boat Stand, which became the industry leader in hydraulic boat hauling. We still use the technology today to haul, launch, move, and store your boat. We offer overland boat transport; boat haul, launch, and transport; special handling and moving; and boat storage in our do-it-yourself boat storage facility. Contact us today to see what we can do for you!